Last night I watched a documentary called “Fat, Sick, and Nearly Dead” and it got me thinking. Seriously thinking. The statistics and information that they shared was mind-boggling. I am amazed at the amount of fast food the average person eats, and the average consumption of starches, sugars, and fats, compared to that of vegetables and fruits. 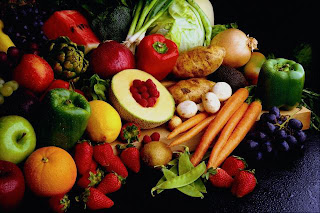 The documentary started off with one man who was, fat, sick, and nearly dead, deciding to take control of his life and his future by going on a 60 day juice fast. He would ‘juice’ large quantities of vegetables and fruits for every meal for 60 days with the hopes of getting to a healthy weight and reducing or eliminating the amount of medication that he was required to take in order to stay alive. After his 60 day juice fast, he would then endeavor to maintain a healthy lifestyle, eating mostly vegetables and fruits.

And you know what? He did it! He lost his unhealthy weight, slowly reduced, then eliminated all the medications he was on (with the approval of his physician), and he maintained his weight afterwards by not eating fast or processed foods, and eating lots of fruits and veggies. It was remarkable.

Along his journey, he met some people that he inspired to do the same. Their results were similar. One woman suffered from migraines, but after juicing for 10 days, her migraines disappeared.

I can honestly say that I, personally, don’t eat enough fruits and veggies. But this documentary inspired me. It inspired me to try my own sort of juicing goal for 10 days. I will not cut out food altogether, but I will juice for breakfast and lunch, and I will eat dinner with my husband and sons. Of course, I will not eat pizzas, pastas, or junk, but I will make salads (which I make 3-4 times per week anyway), and other raw fruit and veggie based meals. That way I’m not fasting per-se, but will still consume the fruits and vegetables that my body needs.

Here goes nothin’!
Posted by Unknown at 7:52 am