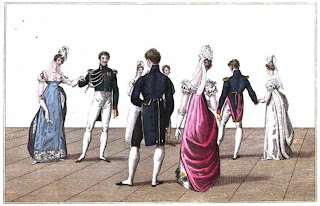 One reason why I am fascinated by Regency England is because of the fashion. I love the empire waist dresses, the gloves, the fans, the men’s breeches, cravats, and hessian boots. The hats can appear ridiculous, but it kept the women’s complexions untouched by the sun, despite the many hours they spent out of doors.

Fashion had a fascinating affect on society at the time. In today’s day and age, everyone has a different sense of style, but in Regency England, the men and women all wore the same style. The only differentiating factors were the material used and the quality of the gowns and suits. 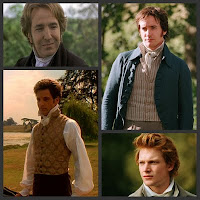 The interesting thing about this is that if a woman didn’t follow society’s dictates of fashion, they were considered ‘fast’ (or in today’s terms, a ‘slut’). People would protect their daughters from those such women by refusing to allow them to socialize or by giving them the ‘cut direct’, or ‘cold shoulder’.

The men in that time were either average in dress, or they were considered a 'dandy'. A dandy was a man who spent hours on his appearance. Perhaps they were perfecting their cravat, or they were straightening their waistcoat, or even adding a bejewelled cravat pin or cane. Whatever it was that they did, their added effort often encouraged other young bucks to follow in the fashion trend. 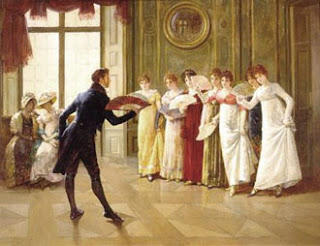 It was unseemly for men to be seen without a jacket by the opposite sex. The only time it was permissible for a man to be in his shirtsleeves or without his cravat was in the company of men, and likely in his office or library at home. But never in public.

I have several books on Regency fashion, I have looked up photos, and I have watched most films that took place in that period. I am simply captivated by it!

How do you like Regency fashion? Do you find it as interesting as I, or do you find corsets and stockings a bore?