I have collected many things in my lifetime. When I was young, it was marbles, buttons, and candles, but as I grew up my interests changed. Now I have a passion for antiques.

When I walk into an antique shop my heart rate picks up speed, my stomach flutters with excitement, and my mind races with thoughts of what I want to bring home. Of course, I gravitate to the smaller items, such as teacups, books, and keys, so my house has not yet overflowed with antique goodies. 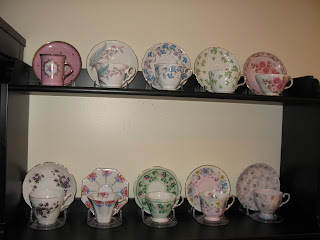 My personal collection is modest, but I encourage it to grow at every opportunity.

When I pick teacups, I will only pick one from each store, that way each teacup is individually special. I do not search for a particular pattern, shape, or colour, but it must catch my attention. I usually scan a grouping of cups and immediately ‘hone-in’ on one, pick it up, and declare it mine. 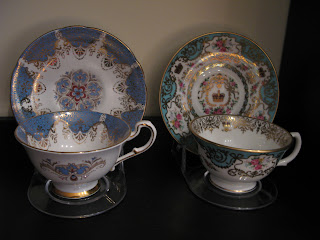 One of my teacups (the white and teal one with the crown in the center) is not an antique. This one I purchased on my recent trip to London. It came from the gift shop in the Tower of London, and despite my love of antique teacups, I could not resist this one. 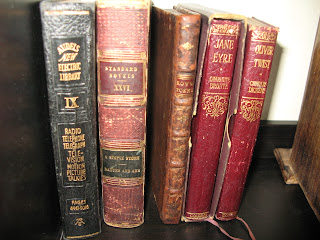 The antique books I own are another treasure that I hold dear. The first in the line of books in the accompanying picture is actually my husband’s. It is not so old as the others, but as my husband is an electrician, he found the aged electrical guide amusing.

The second book in the group is a combination of two novels written by a woman named Mrs. Inchbald. She was indeed a very interesting woman.

The third book in the group is one of my favorites! It is a book of poetry written by a man named Nicolas Rowe. He was the first modern editor for William Shakespeare, and was apparently very famous in his day. The book cost me nearly $100, but I feel it was worth it. I was so excited to have a little piece of history in my hands that I couldn’t resist!

The last two novels (Jane Eyre by Charlotte Bronte and Oliver Twist by Charles Dickens) were also an impulse buy. They are second (or third?) editions. It would be easier to pinpoint if they had publishing dates, but sadly they do not.

If you’d like to read more about antique book collections, visit my friend Susan’s blog, 'The Granddaddies On My Bookshelf'! 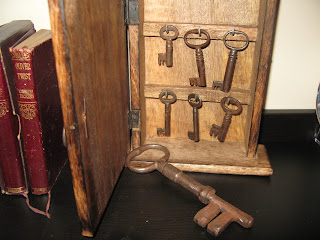 My last (and favourite) things to collect are keys. Skeleton keys to be precise. The older, the better.

The keys showcased in the wooden cabinet were all purchased in St. Andrews, Scotland. The large one sitting at the bottom of the group is from a Highland castle. I cannot describe the excitement I felt upon making that purchase! 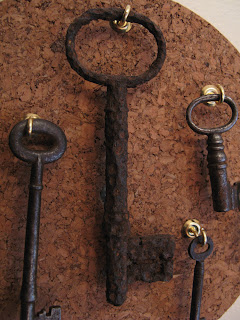 The other large key in the photo on the right was allegedly found in the basements of Fort Langley in BC, Canada. From its age, rough appearance, and the source, I am inclined to believe the tale. 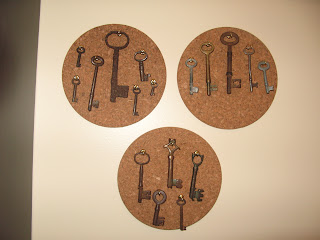 In the picture of my three circular corkboards, the keys gracing the bottom board are all from London, and the keys on the two boards above were all purchased in BC, Canada.

The two keys that I hold in my hand--in the picture to the right--are by far the gems of my collection. 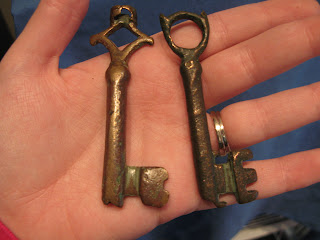 Upon shopping in Knotting Hill’s Portobello Road in London, England, I came across a very interesting antique key merchant. Oh goodness did he have amazing keys! Some went as high as several thousand dollars, Canadian. The two that I hold here were purchased from that man (though they weren’t so expensive). These two were found in the Thames. They are bronze English keys from medieval times (roughly year 1250). These keys got my heart racing and my desire to own them soaring. That was it. They were mine!

What about you? Do you collect anything? Do you like antiques as much as I do?